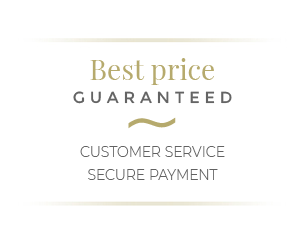 A land to discover

The famous five villages of the Cinque Terre, RIOMAGGIORE, MANAROLA, VERNAZZA, CORNIGLIA, MONTEROSSO are few km far from us, as well as the romantic PORTOVENERE historical village, the medieval SARZANA city, the LUNI Roman amphitheatre, the elegant beaches of BOCCA DI MAGRA, LERICI and TELLARO. MIRAMARE Residence is the perfect departure point to visit the main cultural sites of the Northen Italy: you are 1h/1h30 driving far away from Florence, Portofino, Santa Margherita, Genoa, Carrara, the Chianti area … and 2h00 far away from Milan and the ‘golden shopping triangle’, Montenapoleone, Brera e Duomo. And if you like to do shopping: Forte dei Marmi, Serravalle outlet, Barberino outlet… are a stone’s throw away. 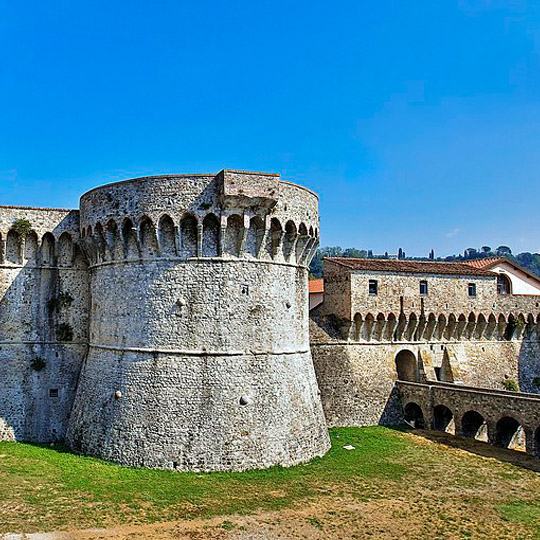 In the Middle Ages, Sarzana was an important fortified village. Today, Sarzana is a welcoming place where modernity and tradition have been blended harmoniously. The downtown streets and buildings maintain the original layout of a typical medieval citadel. The numerous churches, historic buildings but also the gardens and streets kept Sarzana as a delightful small town. Particularly in summer and spring time, the city hosts dozens of cultural events. From the day dedicated to the gardens (Atri Fioriti) where the inhabitants open the gates of their wonderful gardens to external visitors, at music festivals (eg Sarzana Guitar Meeting) to the great Antiques Market in late August. There’s no weekends in which this city does not offer anything special. Culinary and wine festivals, art exhibitions and cultural events make “sparkling” this ancient village.

The small village of Porto Venere is located on a peninsula in front of which there are three small islands: Palmaria, Tino and Tinetto. Here, according to tradition, was born the goddess Venus (from which the name Portus Veneris). On this mythical place of birth now stands the beautiful church of San Pietro, built on a cliff overlooking the sea. The village is typically Ligurian with colorful houses, one next to the other, on steep sloping down towards the sea. In the small harbor the local fishermen moored boats of and a lot of fish restaurants are welcoming visitors with typical dishes of the Ligurian Riviera. 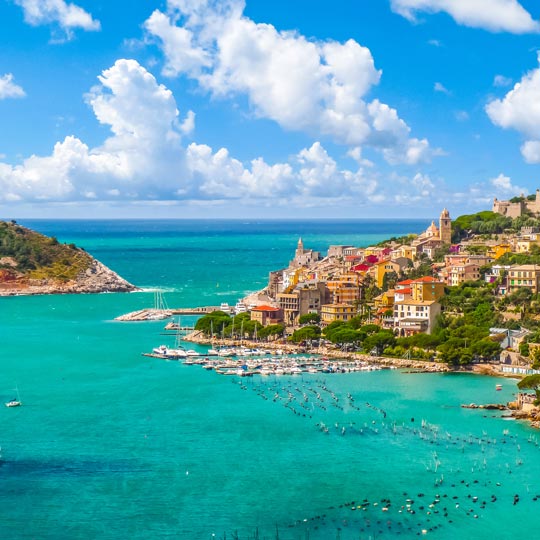 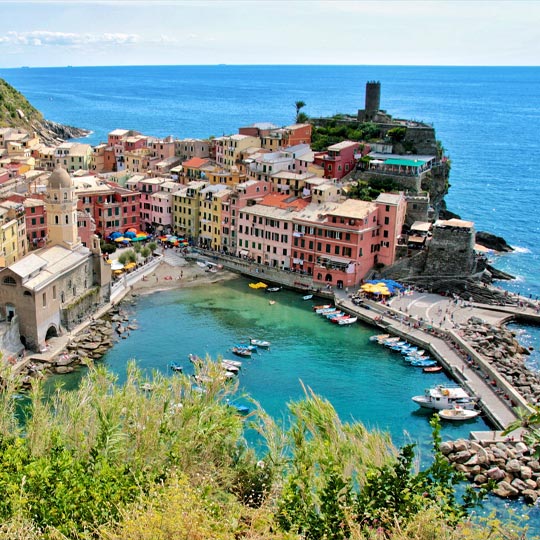 The five villages of the Cinque Terre show to the visitor a magic human and geographical landscape. In the decades the farmers of these lands have transformed the hills overlooking the sea in lands to grow vineyards. The coexistence between man labor and nature created a unique place. The five fishing villages are facing directly on the blue sea. Small alleys (the famous “caruggi”) are sloping down towards the sea. All around, you will be fascinated by the green cultivated hills: vineyard, olive and lemon trees. These amazing location, is a part of a World Heritage UNESCO and a part of the National Park of Cinque Terre.

The village has been founded in the Middle Ages, in a nice valley covered by olive and pine trees overlooking the sea. A part of the Levanto area is inside the National Park of Cinque Terre and Cinque Terre Marine Protected Area. Levanto (as well as Bonassola) is knew for the beauty of the sea and the beaches: it’s the a perfect destination for a relaxing day. Levanto is also became known for the young people who have found a good place for surfing. 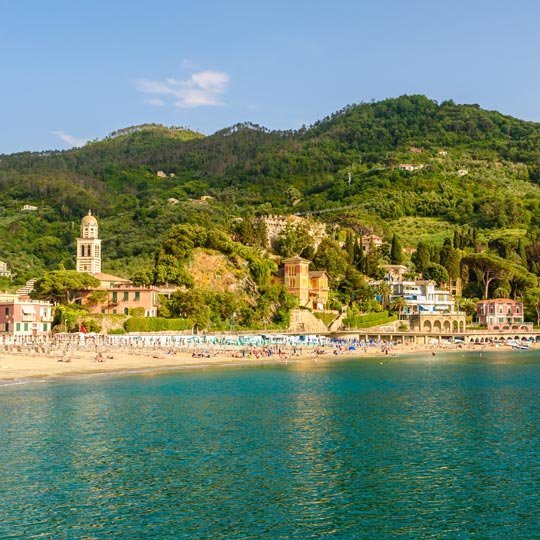 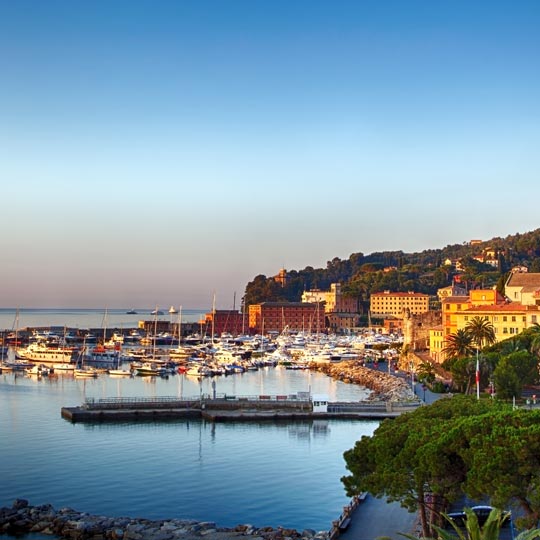 Santa Margherita is one of the most elegant location in the Riviera. The small and cozy harbor seems to be built by the Romans: a cinerary urn from the 3rd century A.D. with a Latin inscription (today conserved in the Basilica of Santa Margherita), has been found, but nothing is confirmed yet.
Destroyed by the Rotari in 641, the original village, populated mainly by fishermen, who gave it the name “Pescino”, came under numerous Saracen incursions until the 10th century, when it became the large estate of the influent Fieschi family, until 1229, when it finally became a municipality of Genoa. You will enjoy history, beaches, shopping and good fish restaurants.

It is also called “the pearl of the Tigullio Gulf”, Portofino will enchant you for the beauty of the landscape and the elegance of the village. Once in Portofino walking might be your best option. The town is not large and most hotels and beaches are a short walk from the harbor. Alternatively, mopeds seem to be a popular choice for getting about, especially for those people visiting several of the small regional towns like Paraggi or San Fruttuoso on their own schedule. You will enjoy the relax of a nice walking, nice boutiques and the magnificent landscape: you are in the Portofino protected area. 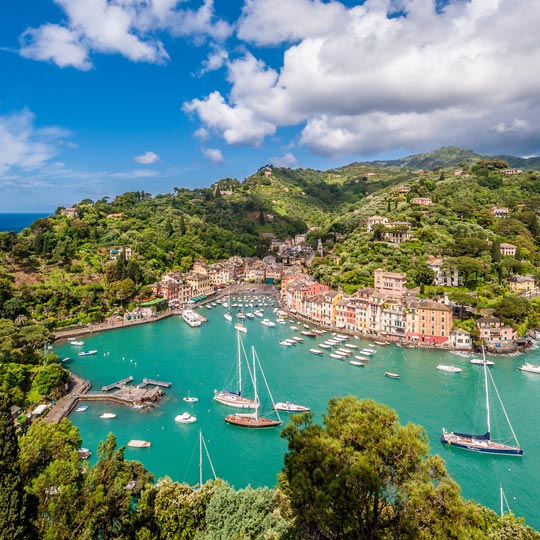 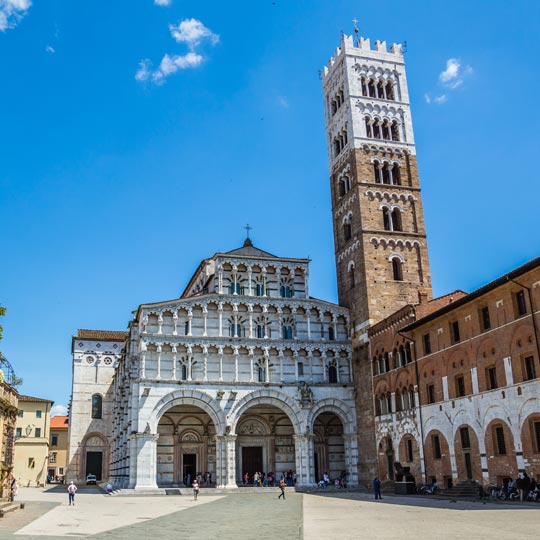 Surrounded by the famous sixteenth-century walls, the historic center of Lucca is one of the jewels of Tuscany. On the walls, completely preserved until today, you can walk and watch the ancient buildings located inside. Lucca is rich in places and churches from which the nickname “city of a hundred churches”. All these buildings create a picturesque and unique landscape giving to the visitors the possibility to see the art’s treasures they host. The Cathedral of Lucca hosts the works of Nicola Pisano, Tintoretto and Jacopo della Quercia. Even the historical buildings have been transformed in important museums: Palazzo Mansi, hosts the National Gallery with the major Italian and foreign artists from the Renaissance to the Seventeenth Century . Lucca also hosts many festivals, meetings, exhibitions.

The visit of the impressive cultural patrimony of Florence has to be a must during your vacation. The historical center of Florence is listed between the World Heritage of the UNESCO since 1982. Duomo, Ponte Vecchio, Giardino di Boboli, Palazzo Pitti, Piazza Della Signoria… you will be magically transported a way back, during the Renaissance time. Enyoing the finest Tuscan food tasting an excellent Chianti glass of wine. 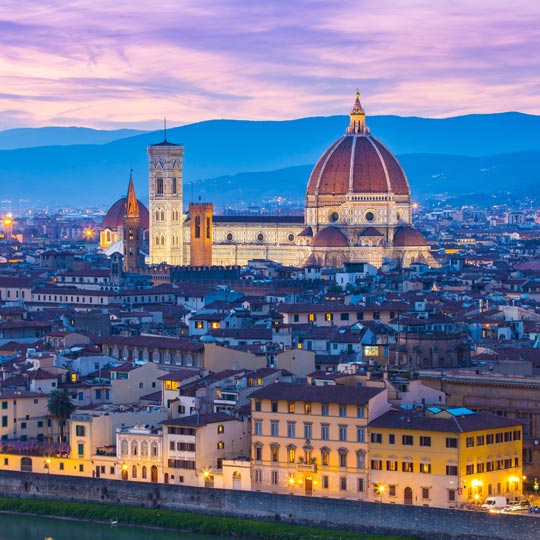 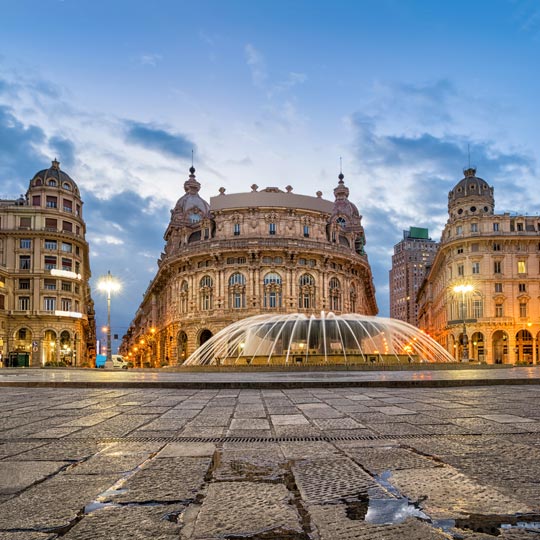 The name of Genoa comes from the Latin janua – gate. A gateway to the sea, to far horizons, the fabulous markets of the Orient. A gate that also closes behind it a wealth of treasures: the arts, history, society and culture, the ordinary men and women who shaped the destiny of Genoa. Black and white are the city’s hallmarks. The white of the old patrician palaces and the black slate. Typical examples are San Lorenzo cathedral, the church of San Matteo, numerous villas, porticoes and cloisters. Black and white is somehow emblematic of the Genoese character. In book II of the Georgics, Virgil places the Ligurians midway between the Sabines and the Volsci: virile the former, martial the latter. Diodorus Siculus was struck by the physical strength of the Ligurians, whom he judged “as indomitable as they are proud”. Genoa is also known as the birthplace of Columbus, it was already, and continued to be long after, the birthplace of a noble race of navigators: from Antoniotto Usodimare (who reached the mouth of the Gambia in 1455) to the Vivaldi brothers (explorers of the West Coast of Africa), Lanzerotto Malocello, discoverer of the Canaries, and Nicolosio da Recco, discoverer of the Azores. You will enjoy arts, history, the big Aquarium, shopping, and a typical Ligurian tasty food.